*️⃣ It was on the 9th January 2015 that I was told that I needed to have a transplant.

From my blog on that day –

“Been accepted for transplant.

Should I go on the list? Extreme mixed feelings about it all.

And at times like these I wonder if my life’s even worth it. Is it worth all the hassle. Just want to disappear.”

I had spent the week as an inpatient in the QE Birmingham undergoing tests and speaking to a surgeon etc.

It certainly was an emotional and scary time.

*️⃣ It seems that some things haven’t changed during the five years!

If you go to the Archives and read my blog posts for early February 2015, you will see that I was feeling very unwell and had the dreaded Shingles. I had been given tablets to take but it seems like they were just making me feel extra poorly 😏

And this is exactly the reason why I just put up with all the Shingles outbreaks that I still regularly get now.

I was VERY unwell at this time, in pain, was suffering with ascites and could barely do anything. 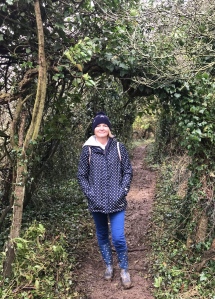 The picture on the right is of me on my birthday in 2020.

I was feeling well and was on a very wet and muddy five and a half mile birthday walk 👣 with my two special girlies.

*️⃣ In the early evening on Saturday 21st February 2015 I got a telephone call to say a liver had been found for me.

In the early hours of the morning on Sunday 22nd February 2015 I went to theatre to have my liver transplant.

The next day my family were told that the liver was failing. They needed to find me another liver quickly.

On 27th February 2015 I went back to theatre to have my second liver transplant.

And now 5 years has passed 😯

Happy liver anniversary to me 🥳

On 27th February 2020, to celebrate my five years, I organised an organ donation awareness stand which I did at the John Radcliffe Hospital in Oxford where I volunteer. 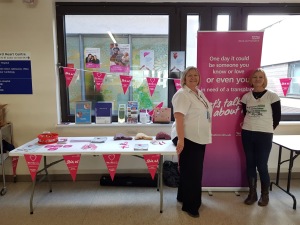 Thank you to my two donors 💗💙 and their families for giving me all these new opportunities.

*️⃣ At the beginning of March 2015 I was one crazy lady! Talking nonsense, being difficult, some might say that not much has changed 🥴 It was the start of my long recovery, such tough times.

At the beginning of March 2020 I was treated to a day out in London with my special friend Nina. She took me to see Mamma Mia! The Party 🥂💃 We had a fun time.

*️⃣ And then the dreaded Coronavirus arrived and put a total stop to any places that I might have been able to visit during my fifth year.

I went to stay at my sister’s house as I was still extremely weak. I definitely couldn’t leave the house on my own. It was the start of a very long journey to build my strength up and to be able to get out and about again.

At the beginning of April 2020 as I was one of the ‘extremely vulnerable’ and at risk of severe illness if I caught the virus 🦠 I was told to STAY HOME to protect myself.

Funny how things work out isn’t it? 🤔

I definitely didn’t want to waste all this time. So a ‘garden makeover’ it was!

Among other things I emptied two builders’ bags full of gravel so they could finally be cleared away from the garden, back breaking work shovelling all that! 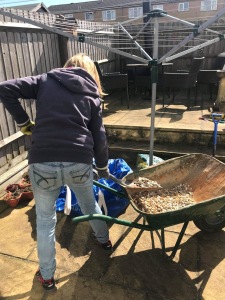 I was exhausted with a hurting body almost every day. But I managed it all by myself 💪

If you had asked me back in 2015 I never would have thought that I would be able to do all of that.

And now I get to do the fun stuff, sorting all my tubs and watching everything grow (hopefully! 🤞)

But one thing that is still the same – my appetite, I still don’t have a very good one. And yes, people still nag me and just want to ‘feed me up’ 🤐

*️⃣ On looking back at the posts I wrote for May 2015 it seems I was just starting to get out and about again – visiting places, going out for the odd meal.

The only achievement for May 2020 (still spent in lockdown) is probably the fact that our daily walks were able to be a bit further afield including around and about The Rollright Stones, in local woods and around a park in Oxford. 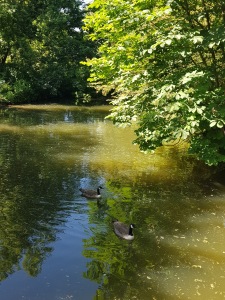 Oh and I fell into my peas in the garden and really hurt my leg.

That was May’s excitement!

*️⃣ On 23rd June 2015 I went back into a local hospital with a temperature. I had a low white blood cell count and it was thought that I might have an infection. On 1st July I was transferred back to the QE in Birmingham so they could investigate more. They never really did find out what the problem was 🤷‍♀️

Eventually I was allowed home on the 8th July and I went to Cornbury Music Festival for the weekend on the 9th! Then I also went to Riverside Festival at the end of the month.

*️⃣ On a day out to Stratford upon Avon in September I took the opportunity to recreate a photograph. (Yes it is the same place, they just seem to have renewed the fence!)

On the left, it’s not too long after I left hospital in 2015, we had stopped off on the way back from a clinic appointment, I couldn’t walk far at all and had just got out of the wheelchair to have the pic taken. On the right, this is me now! and I can walk for miles (apart from it hurts my back and hip, but that’s another problem!!)

Back in September/October 2015 my clinic appointments were still quite regular, every few weeks or a month. Now I’m down to usually a 6 monthly check, but even that got cancelled thanks to Covid. Just a phone call clinic appointment for me this time in October. So I’ve gone 10 months, must be a sign that things are good if they can leave me that long now.

And when I read back on my blog I seemed to still have quite a few days where I felt unwell and I still got very tired when I was doing any jobs, I guess it was still early days back then. I do still get tired sometimes now, but nothing like that and I can usually push myself on to do a whole lot more, probably more than I should sometimes.

Something that hasn’t changed though, my organ donation promotion. Back in 2015 I talked on the radio, was in the local paper, did a stand. This year I’ve still done my bit to promote, back in February for my anniversary and during Organ Donation Week in September 🙂

*️⃣ On Tuesday 3rd November 2015 I went back to work. I had been off for almost a year. I started back slowly, just doing 2 x 4 hour shifts a week and would gradually increase. I seemed to get on okay with this, just getting tired out, so nothing’s really changed there!

Who would have thought that five years later I would be off work again, but this time having to stay at home to protect myself from the Covid-19 pandemic 😏

*️⃣ December 2015/December 2020 – doesn’t matter if I’ve recently had a transplant or it’s 5 years on, there’s no change, I still don’t enjoy all the Christmas preparations!

*️⃣ In January 2016 I bought myself a new car and finally started driving again. I had to stop driving while I was so unwell before transplant and now I had gone back to work, was starting to feel a little more ‘normal’ and my old car was just no good any more, it was time for a treat.

Here I am in Buzz, my little red mini 🚗😍

Five years later, I’m still driving around in my little red mini, he now has a few little dents and scratches 😏 but I still love him though 🚗 😍

My scar’s done well in the 6 years, don’t you think? (Especially as it was cut open twice!)

Thank you Covid-19, for letting me share my 5th year with you, it’s certainly been very different and at least I can now add ‘living through a pandemic’ to the list of things that I’ve been through.