Boxing Day. My memories of Boxing Day as a young teenager were fun. My dad’s family used to all come over to our house, so that meant my aunties, uncles and cousins. And there were lots of them! My cousins were all older than me, my brothers and sisters age’s, and some of them already had their own children. What used to happen mainly was that the little ones and babies were left at our house with my mum and the aunties, so they could play together and have a good gossip respectively, and all the others would go off down the town to watch the local hunt go off and then went into the different pubs in the town for a drink. And then another drink, and then another and another. Later, various different groups of people staggered back at different times throughout the afternoon (in different stages of drunkenness!!), where my mum had mash potato, cold meats and pickle waiting and her famous homemade cheese and onion pies (and sometimes her homemade wines used to come out for tasting!) Trifle and Christmas cake was always on the table too. My dad and brothers were quite often the last ones to return. And often turned up with someone they had been chatting to in the pub and had just invited them back! My mum never bothered, anyone was always welcome to come in and have some food and join in the party. The house used to be full. Everyone just used to stand or sit around (if you were lucky enough to grab a chair), chatting, eating, drinking, messing about, playing games, sometimes even dancing. I can still remember my dad going into the kitchen and getting my mum and waltzing around the living room with her, then a couple of others joining in.

This went on for many years. Fun times. Then gradually, I think mainly as everyone got older and it was harder to do, some suffered ill health and the younger ones had more of their own families or other people to go and visit, it stopped. 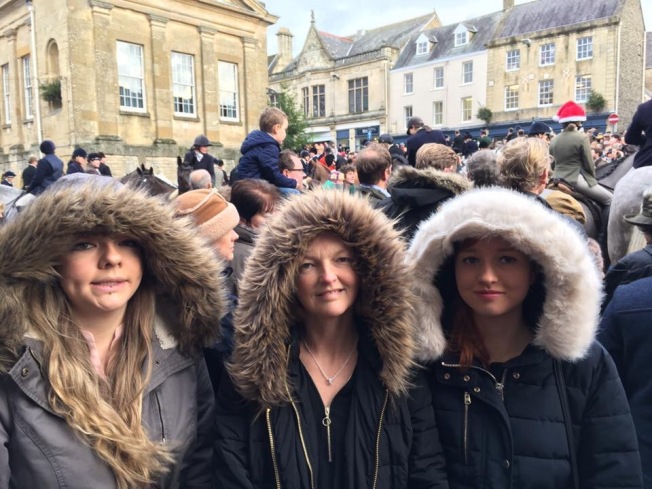 So now it’s just mainly me and my kids and my brother George and his kids and their kids! that still go down to watch the hunt and then go into a pub in the town after. But now we all have our lunch together in the pub too.

This year most of the others seemed to go home quite early though. So me, Robyn, Leah and Jack also went home. Then Leah and Jack went off to their friends’ house in Banbury and Robyn went back out to the pub with her friends, and I was home alone 😦