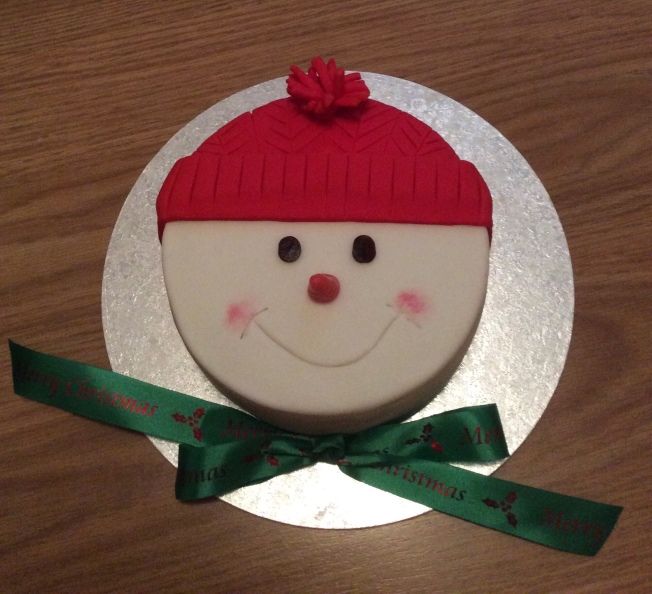 My Christmas cake, made for me by my brother-in-law John and decorated by my sister Lynda 😍

(By the way, I will be back with a full update shortly, annoyingly this Christmas lark seems to take up all my spare time ☹️)

And so begins a very horrible time.

A torn muscle = extreme pain 24 hours a day 😢 There was just no escape. Every single night I was woken up with the pain.

I was virtually housebound. As I could barely get around, obviously I was not able to leave the house unless someone was available and willing to take me. Everyone was at work most of the time, then busy doing other things.

I had some long and lonely days.

One day I even tried crawling into the kitchen on my hands and knees so that I could try and make myself a cup of tea. I wasn’t successful ☹️

I had to go up and down the stairs on my bum. This is quite hard, you have to use your arms and shoulders to pull yourself up, so then after a while they start to really hurt too.

At times I tried to keep myself occupied by doing jobs around the house but every movement hurt so it all took rather a long time.

I was lucky enough to be taken out a few times.

I managed to borrow a wheelchair from a friend’s mum and one day Robyn and Leah took me into Banbury. It’s so very frustrating having to be pushed around in shops, you see something you want to go and look at but you have to just sit and wait as you are relying on someone else to get you over there. It does make you realise just what you take for granted when your usually able to do it all yourself.

During this time I had a previously booked doctors appointment, so Dr Fisher had a look at my leg too and told me that I would definitely need some physio, could I please ring and get an appointment with them. I really wasn’t sure how that was going to be possible because no one can come anywhere near my leg at the minute, let alone touch it and move it about!

Dr Fisher also told me that he had finally heard from my consultant (have been waiting for ages) and that over a few days I was to finally start reducing the noresthisterone (hormone) tablets that I have been taking and then stop them completely, which I did. As a result of this I have been bleeding all the time again 😡 but hopefully this will settle down 🤞

As a result of being so run down I imagine, I also had more outbreaks of my Shingles related virus.

Just more things to have to cope with 😖

After 12 days I finally started to notice that the excruciating 24 hour pain was easing. (There really had been no improvement in my leg whatsoever until then 😩) I still had a whole lot of pain and I still couldn’t walk, but I was starting to be able to move my leg about a little more.

Now I would be able to start having the recommended physio I imagine.