My head is a little more distracted, always thinking about a few very brave people I know who are dealing with some very difficult times with their own liver illnesses ☹️😍

Have you heard of ecobricks

Read about the Chipping Norton Ecobricks Programme which has been set up by the Midcounties Co-operative (the shop where I work is part of this group).

I’m making a start on mine!

Why not have a go at making your own Ecobricks and either find somewhere to donate them or maybe even have a bit of fun and build yourself something!

And while we’re on the subject of recycling, have a look at this shopping mall in Sweden.

But remember that you still need to talk about your wishes with your families though folks!

You can find many stories to read from transplant patients telling you about their own journeys, but its not very often you get to hear from a surgeon. Have a read about this transplant surgeon who was in the amazing team that completed 6 transplants in just over 30 hours last year.

On a lighter note, I often get told that I think about things too much! 🥴🤯

Both of my daughters have Polycystic Kidney Disease which unfortunately they have inherited from their dad. He had a successful kidney transplant in 2011. It is probably quite likely that they will both need a transplant themselves as the disease progresses.

Have a read of this post which has been written today by Kelly, one of my daughter’s friends.

So let me talk you through some of this (this is going to be one long post).

Diagnosis: One day in 2004 i woke up with a swollen face, i was only 9 at this point so my parents took me to the doctors, they put it down to an allergic reaction as most doctors would, it’s only when they done bloods they realised something was wrong with my kidneys, i got sent to the children’s ward and my parents got told i had a rare condition called Nephrotic Syndrome. It was also a leap year day when i got diagnosed so i always remember the date. 🤪

Biopsy: Now I’m not 100% sure on the year but i think it was about 2011/2012 they investigated further and took some of my kidney, the first biopsy didn’t show anything much so they done a second a while after and it came back with fsgs! I finally had a full diagnosis although no reason behind it.

Treatment: now this is complicated because there’s so many and I’ve probably forgotten some, i remember having; steroids, cyclosporine, retuximab, MMF, plasma exchange, campath, tacrolimus and cyclophosphamide. Some of these were trial drugs so i had massive doses that they wouldn’t give now. I had an allergic reaction to retuximab where my throat closed up and the worst for me was cyclophosphamide (chemo as many people would know it) my hair lost all colour and I’ve been dying it ever since, although it gave me 18 months drug free!

Failure: I eventually got to the point in about 2014/2015 where nothing was working and i was told i would have to start dialysis soon and there were no more treatments options just dialysis or a transplant. If i didn’t pick either I’d eventually die. They told me to decide what dialysis i wanted and start looking for live organ donors.

Transplant testing: once i had the news i needed to look for a donor my mum stepped forward and she was a pretty good match! So they rushed her all through the testing seeming as i wasn’t on dialysis yet! The testing can take upto 12/18 months! It’s like a full body MOT and they would refuse you if you had anything slightly wrong with you. My mum even gave up smoking once she was advised to, they rushed her testing through and i think within about 6 months she’d finished and we had a transplant date!

Transplant: now because we weren’t 100% perfect match i had to go through some treatment before and after to make sure my body would accept the kidney, this was plasma exchange and campath! The transplant happened 9th of July 2015! Everything seemed to go perfect, a couple of days later my hb levels were low and i had to have a blood transfusion but other than that everything was fine! Mum recovered well and to this day she says she feels better than she did!

Transplant medication: so the medication you have to take is actual toxic to your body and getting the levels correct isn’t easy. You have to take upto 30 odd tablets a day for the rest of your life just to stay alive. You don’t really hear this about transplants. The side effects are nasty and your chances of getting cancer are stupidly high.

Rejection: so roughly about 9 months after transplant i had a mild rejection episode (these aren’t uncommon) i got treated with some IV steroids and it seemed to control it! Until a few months later i couldn’t stop getting urine infections and no antibiotics would work! This sent me into dither rejection and by the time they done a biopsy to check on the transplant it was too far gone. So after roughly a year of having a transplant i got the news it was failing.

Dialysis: i managed to hold out until 2018 until i needed to go on dialysis which was a miracle to everyone, you should ideally start at >15% function i stretched it until i was 2% which is pretty dangerous but i felt ok, i was used to throwing up every day and being exhausted all the time. But when i started passing out every few hours and none stop throwing up i knew it was time. I went into hospital had a Tesio line fitted and started dialysis on the same day. Now i do dialysis 3 times a week for 3 hours each time.

Line fitting: the line fitting wasn’t nice. Imagine having your collar bone sliced into a some metal wires being fed into your heart over your collar bone and down the front of your rib cage… whilst awake. Yeah it wasn’t nice but this was my life line. (The remove the metal and leave plastic straws in place)

Dialysis complications: now dialysis is purely there to keep me alive and it’s tough on your body. You have 60ish litres of blood pulled out your body washed and pushed back in so you can imagine your body does not like this. The complications I’ve had are blood pressure issues (low and high) and extremely low blood sugars even though I’m not diabetic. It’s exhausting physically and mentally and nothing and prepare you fully for it.

Active on the list: so i started dialysis July 2018 and by about November/December 2018 i was active on the list! But my antibodies are high so finding a match is hard. I got the news i could be waiting upto 10 years, this would make me 34 by the time i have another chance at life. I’ve been told a live donor is my best bet but you can’t just get someone to donate their kidney to you.

Dialysis extras: so whilst on dialysis you have to watch your diet so closely because your body can’t filter food or drink like anyone else’s can, you can’t have much chocolate chips dairy etc so your diet is mega restricted. If i was to have a banana (luckily i hate them) i could die from high potassium.

I think I’ve covered most of my journey and i hope this raises some awareness. Kidney failure isn’t simple and a transplant is far from a cure. Please donate your organs. 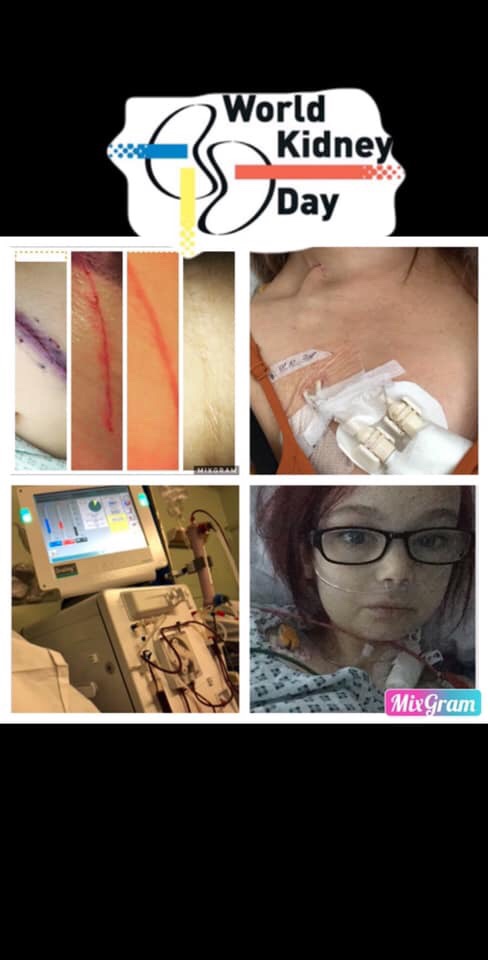 So you can see why #WorldKidneyDay is important to me and my family, to help to raise awareness and to try and help to promote organ donation as much as we can 👍

A dermatology appointment on Monday at the Churchill Hospital. Just too confusing to say what it was all about! 🤯

We still had the unseasonably warm and sunny weather so I took myself off for a nice walk round and about after my appointment so that I could enjoy some of the sunshine.

There was not a cloud to be seen in that beautiful blue sky. 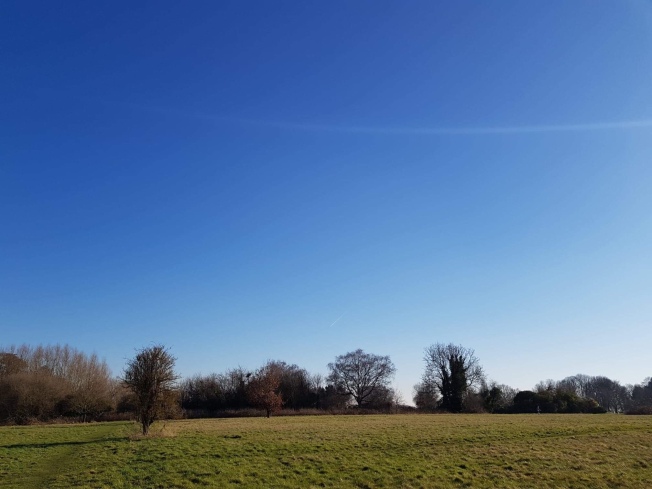 I take many photos, of anything and everything! As you can see on my ‘Friday pic’ page on this blog I chose a ‘favourite or most relevant photo’ during each week of 2018 and I decided that I would make this ‘year of my life in photos’ mosaic in time for the 4th anniversary of my second liver transplant which was on the 27th.

If I’ve worked it out correctly 3,150 photographs make up this pic!

Now to think of something for my next project …

A couple of days off work using up holiday allowance, some sorting out done, more stuff for the charity shop 👍

Some lovely weather we’ve had. Very unusual for this time of year but its just heaven for me. I don’t like the cold and it means that I get to feel my fingers! It was time for some extra walks whenever possible to enjoy the warm sunshine.

It was four years since my first transplant on the 22nd.

So my treat to myself to celebrate – a croissant with some tasty strawberries for breakfast.

This was all followed by a weekend of watching sport on the TV.

Six Nations Rugby on Saturday. And a trip to the pub to watch the football, Manchester United v Liverpool on Sunday.

Yay, he did it! Lewis Capaldi made it to Number 1 😀

On a Friday I usually listen to the Official Chart with Scott Mills on Radio 1 and have been following this song’s progress for a few weeks now.

“The track has gone from Number 3 to the top spot. It first entered the Top 100 at Number 66 back in January and has steadily climbed over the past nine weeks.

The music video for “Someone You Loved” was released on 8 February 2019, starring actor Peter Capaldi, who is a relative of Lewis Capaldi. It was directed by filmmaker Phil Beastall. Filming took place in Buxton in late January 2019. The video was made in partnership with charity organisation Live Life Give Life in order to raise awareness for the issue of organ donation. It contains a powerful message of loss and hope, telling a story of a husband who is trying to cope with the death of his wife. She became the heart donor for the young mother of another family, saving her life. Eventually the two families are brought together and the main character knows that his wife’s heart continues to live on.”

Have a watch. I hope you enjoy it 😍