I had to go for an X-ray on my feet first thing Monday morning. Just to see if it shows anything up that may be causing the problems I’ve been having with them 🤔

The rest of the day was just spent pottering about the house as I was feeling quite dizzy at times. I really wanted to go out in the afternoon for a walk but I wasnt sure if I would be okay while I was walking about on my own so in the end I decided I had better not. Very annoying. I also wasn’t really fit enough for yoga, even more annoying

Just work on Tuesday. I found today quite difficult. It was two years ago today that I got my call to say they had found me a liver, so two years ago tomorrow that I had my first transplant 😩 It just brought everything back to me and I kept thinking a lot about my donor and family. I tried to be good in the evening and made myself some food to eat, sweet potato and roasted veg – ﻿even that ended up as a bit of a burnt mess 😳 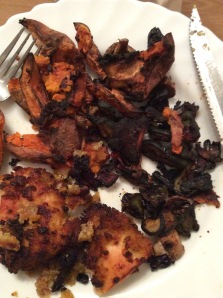 I had a day off from work on Wednesday. I wanted to keep my mind occupied and also use the day wisely so I was determined to get back into sorting some more boxes of junk out, I eventually got into the swing of this and so once again I didn’t get to go out for a walk. I think I did reasonably well, despite all my thoughts still being very much elsewhere, I got a couple more boxes ready to go up in the loft (which Tom helped me to do later in the evening, along with finally putting the Christmas decorations back up there 🤗) I also came across some photos of Robyn and Leah when they were little and various ornaments that people have given me, I think I’ve discovered that we need to get some new furniture now so I can actually display some of my things rather than just stacking them all in a box up in the loft for no one to see!

I then decided to be extra efficient and thought that I would immediately hang up some of the photos that I had found. Well that didn’t turn out to be a good idea. I was attempting to hang a photo of Leah as a very cute 1 year old, I was looking up trying to hook the string over the nail and it fell … right onto my nose and face. ‘OUCH’ it hurt – a lot. A lump immediately appeared, that soon went down but I have been left with quite a bruise on my forehead and nose (for me to receive many comments from people about over the last few days) Sore 🤕

It seemed to be all go in our house later, Tom was doing the hoovering and Robyn was in the kitchen doing some washing up and then cooking the two of them some pasta 🍝

I had to pop out to the surgery to get a blood test. The uric acid level in my blood was going to be tested again. I am already on tablets for this. Apparently if you have too much uric acid in your blood it can lead to gout (a type of arthritis) so my levels are being checked again in case this is the cause of my foot pain. I can’t complain that their not trying to help me can I?

When I got back I was allowed some of the leftover pasta!

I noticed that the oil light had flashed on and off in my car again when I was on the way to the surgery. I had noticed this before so I thought I would text Gary and tell him. (I’m not very good with cars so normally I just get Gary to sort these kinds of things out for me if I can 😣) He came round and found that my car did indeed need some more oil, it was almost empty apparently – I got a good telling off 😰

Please could I have some nice things happen to me …

Perhaps I could have one of these ‘crazy hair day’ styles done to cheer me up a bit. Their very good but the kids would need to have a lot of patience to sit still while you’re doing them wouldn’t they! 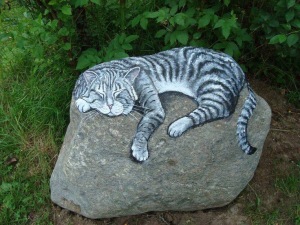 Aren’t these just brilliant. Their actually painted rocks! These are two of my favourites but have a look at these other painted rocks too, fancy a new hobby anyone?!