I decided that I would take myself into Oxford this Thursday morning to volunteer, even though I wasn’t feeling completely brilliant

But I was fed up with just being mainly at home on my own. And if I went out it would mean that I would get some other jobs done too – I would be able to drop some bags that I had previously sorted out into the charity shop on the way and I also had some forms that were needing to be completed about my volunteering duties so I would be able to pop in to the office and get those done too.

I was so glad I had made the effort to go. I was able to have a chat with a lady there who also has PBC, she was waiting for a bed to become available at the Queen Elizabeth Hospital in Birmingham so that she could have a liver transplant assessment. It upset me a little to see the poor lady like this. (It also reminded me of how ill I was myself before transplants and again just how lucky I have been). I think we got on well and she said she had enjoyed talking to me. We both agreed that it is ‘nice’ to meet another person going through the same illness as yourself

I really do hope everything works out well for her …

I called into the volunteering office to do my forms and then I set off on one of my walkabouts! This week though I also needed to find a couple of places on the JR site that Leah has to go to in a couple of weeks for her induction for her new job (more about that later). I found them, I will be able to show her how to get there now, and then I went to get myself a coffee. I think it was at this moment when I realised that I didn’t have my iPad (I take it with me almost everywhere I go!) I tried not to panic and to think calmly where I might have left it. I went straight back up to the volunteering office – and thankfully there it was, I had left it on the side. (They had left a message saying this on my phone but I hadn’t seen it 😏) I don’t know what on earth I would have done if my iPad had been well and truly lost. I would be a wreck 😭

I had a previously booked doctor’s appointment later this afternoon. While I was there I asked at reception if my latest results had been phoned through to Birmingham as I had asked, apparently one of the receptionists was just doing it, then it seemed that the doctor she was speaking to wanted to speak with me so I had to go through into the back area of the reception and have a chat with him! All this time, the doctor that I had an appointment to see was waiting for me 😏 The reason for this appointment was mainly to get myself referred so that my solar keratosis (a common skin condition caused by sun damage) could finally be treated again. If you remember I didn’t want the cryotherapy treatment when I went in February as it was just before my birthday. So they gave me some cream instead, but I decided that I didn’t like the sound of the side effects. As they don’t do any minor treatments for these in my own doctors surgery I need to be referred again to now have the cryotherapy treatment, it is not something that can just be left. The doctor said that she would refer me 👍﻿

I also told her that I was still suffering with the pain in my big toes. She didn’t think it was gout (which was previously suspected) it ﻿may just be the start of arthritis, but it seems like it’s something I’m just going to have to put up with at the minute. And I guess while I’m doing my walking challenge it’s not really going to get any better 😧

I just got back in time for my Thursday evening walk, this evening Kate’s husband drove us to Whichford Wood so we could see the lovely bluebells.﻿

He told me that I needed to reduce my tacrolimus medication now to 1.5 mg twice a day. Also my albumen level was showing a bit low so please could I arrange to go tomorrow and have my blood taken yet again. Hope they can fit me in 😏
It was a nice walk. I also noticed that I wasn’t quite so breathless during the walk this evening. 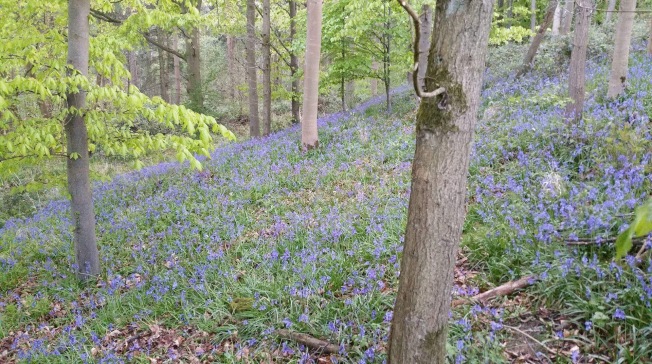 First thing Friday morning I was up at the local hospital outpatients department as I had my follow up appointment with Dr Nicholls (gynaecologist from the John Radcliffe Hospital).

He didn’t have the results of my scan or my biopsy there to give to me, which he did apologise for and was frustrated about. He told me that he would get his secretary to find these results out and he would write to me. I told him that my doctor had told me to gradually reduce the hormone tablets over a few days now that the bleeding had stopped and that I had now stopped taking these completely. He was fine with that. So I guess I just wait to hear from him now with my results and his suggestions of treatment …

When I got back home I had a text from my brother George asking if I was in this morning. So round he came and had a cup of coffee ☕️ Jack, Leah’s boyfriend wasn’t at work today either, so he joined in the chatter for a bit before going outside to sort out a strip of our garden at the side of the house. He cleared the weeds and a bit of rubbish that had been left there, put some top soil down and planted some seeds. Now to wait for the wild flowers to grow 🥀

I then had yet another appointment, up at the doctors surgery this time, to have another one of my Vitamin B12 injections and they had also agreed ﻿to take my blood at the same time. I had planned to walk up there but because of my morning visitors I was a little late leaving so I had to rush a bit, which I could have done without

So after all the stabbings with sharp needles, I decided to go for a bit of a walkabout to get a few miles in, over 4 miles I walked this afternoon actually 🤗﻿