I think a catch up is needed! I do apologise 😏

So during this time –

I have had an appointment with my GP Dr Fisher. He asked for the appointment himself to check that I knew what was going on with all the blood tests I kept having to go to the surgery for following my blood loss in April, to make sure I understood the reasons why they keep such a close eye on me (they do realise it must be very frustrating for me sometimes and very stressful) and mainly to check if I was okay as he hadn’t seen me for a while. How kind of him was that? There are some nice caring people about if you look hard enough!

I have been to a family barbecue, been to yoga, bought some new trainers, visited a friend in Banbury (I used to childmind her daughter and we have stayed in touch). I’ve been to a music festival in our town with my family to listen to some live bands play, visited my friend Jackie for a cuppa and of course just been going to work as normal.

I’ve spent an evening in Oxford with Robyn which was quite fun. We decided to catch the bus in to make it a bit more different. While on the way she suddenly decided to take the sticky label off her water bottle and proceeded to ‘wax’ my eyebrows with it 🤣 We had a scary bus journey on the way home in the dark, trust us to get the one that has to go through all the villages, and as the driver seemed to like to drive rather fast, sitting upstairs right at the front of a double decker bus is not to be recommended in this situation 😱 Robyn also kept me entertained by constantly playing the ‘would you rather’ game, funny girl!!!

I’ve had a couple of unsuccessful volunteering attempts for different reasons which is a bit annoying when I’ve made the effort to get up to the hospital. But I try not to get too fed up about this and usually turn the day into my own and go for a nice walk about and then go and get myself a coffee, have a blog and some iPad time.

We have been fortunate enough to have had some very nice hot and sunny weather ☀️ Its been extremely hot at times, some unbearable hot and sticky nights.

I have of course been doing lots of walking and have been on some good long walks. June was in fact my best month so far with 127 miles being walked. I have also now reached the 500 mile mark 👣

I would love to be able to have a go at doing some of the long distance walks which are mentioned in Walking in midlife. Perhaps I should take some of the lady’s advice and just take off 🤔

﻿On one of my walks to the local unused airfield we found masses of succulents growing wild, I brought a few tiny offcuts home with me and replanted them. So far they are still doing well 🌱 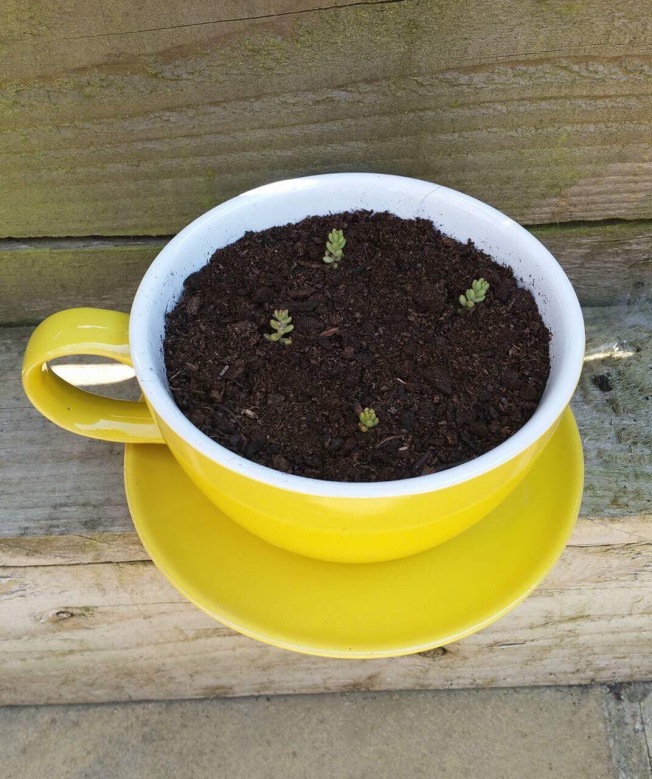 I’ve spent other little odd bits of time in the garden when I can. I enjoy pottering about on a warm sunny afternoon. I am really quite pleased with the way all the flowers in my tubs are doing, I’m not used to having much success with things 😏

And finally healthwise – I have had a headache on and off for quite a lot of the time (something I don’t usually suffer with). I thought it was possibly the hormone tablets which I am now taking but when I mentioned it to my doctor he didn’t seem to think it would be those and said why don’t I just think about getting my eyes tested! Sensible idea I guess. My hands and ankles have been swollen from time to time but I’m just putting that down to the hot weather. I have had various difficult things going on which I have had to try and deal with so I have been struggling mentally some days (stressed, difficulty in concentrating) and I have been quite upset at times, but I make myself keep on going 💪! My main problem at the moment seems to be my feet, I do get a lot of pain from them 😫 which is not ideal when you’re trying to do a walking challenge … But apart from all of that, generally I have been feeling quite well!