Tuesday 3rd to Wednesday 4th May

Tuesday was just a normal day spent at work and then at home. I knew I had a busy time ahead of me in the next few days!

Urm, I think I might have found out why I have a very sweet tooth. I am going to blame my ‘birth liver’ as it seems I might have been lacking a hormone FGF21 during all the years it wasn’t working properly which made me have sugar cravings!!! I don’t know what excuse I can use for eating too much chocolate now I have a great new liver which is working very well though

But on a serious note, have a read of this interesting article Liver Hormone. This important finding from recent research may end up helping many people.

I had to be at the Churchill hospital in Oxford for 10.00am which meant an early start. The traffic around Oxford is always bad, and now there is a whole load of roadworks going on, which just adds to the chaos

I had sorted my bus journeys out as I wasn’t going to be allowed to drive myself back after the operation. Then at the last minute Gary said that he was able to take me and bring me back, so we set off at around 8am.

The doctor injected the anaesthetic into the back of my shoulder. Ouch, that did hurt a bit but then gradually faded. She gave the area a good clean – and then cut out the mole! I did ask if they could take some pictures while they were doing it so I could share them with you here on my blog, but she said that it would be quite difficult. Sorry

I could feel her spraying lots of something into the ‘hole’ I’m guessing and then she put the stitches in. She said she would then give it an extra clean. 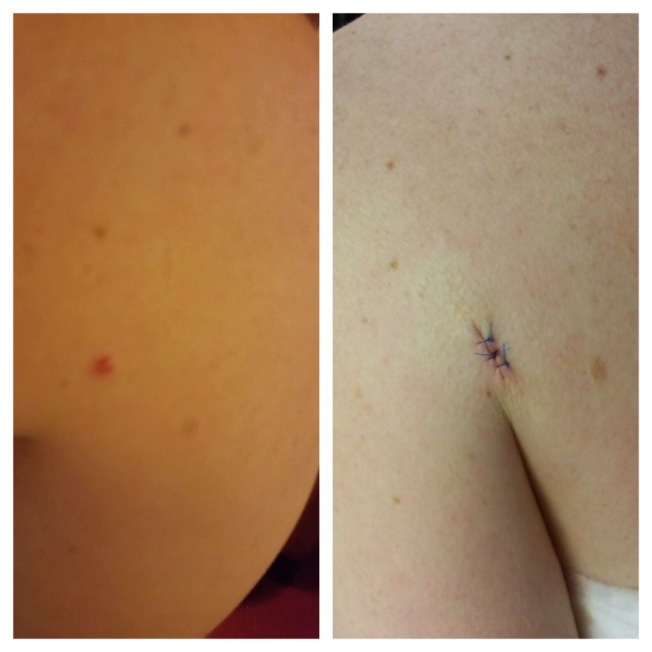 She then asked me if I had got time off work as I wasn’t allowed to move my arm too much. Because of where it was, there would be a lot of movement in that area, and the stitches might come apart! I wasn’t expecting any of this, I thought I would be fine to use my arm, so no I hadn’t booked any time off

She gave me a note to give to my boss. She also told me that my daughters had to make my meal this evening and wash up and that she was prepared to write them a letter 😂 I had to keep the wound dry for at least 48 hours, when I could also take the dressing off. I needed to keep an extra eye on the wound and be careful of infection (because my immune system is suppressed from my medication).

Then it was time for my next treatment! It seemed like my wart had decided to become very stubborn and nothing at all had happened to it since my last appointment when the doctor had used the liquid nitrogen on it. So I told this doctor and she agreed to give it another go, saying sometimes they can be hard little things to get rid of. This time the wart went white immediately so I am hopeful that it will come off very soon, fingers crossed 🤔

When I got back from the hospital I then went straight to the surgery where the Citizens Advice Bureau hold a drop in session on a Wednesday. Time for a bit of stress for my brain now! I wanted to just see if they had any advice for me or any different ideas about having to find somewhere else to live or if there was any financial help I could get. Basically I was told no. Mainly because my two daughters still live with me, but because they are over 18, both work full time and they are not dependent on me, it means we don’t really stand a chance. So it looks like we have to stay in privately rented accommodation, which in this area costs an absolute fortune, and ‘budget’ she told me to pay this and all the bills!!! She was talking to me as if I didn’t know how to do this. I’ve had a house to look after since I was 19. I think I know how to do things in this area by now! I was a very despondent Pinny when I came out of there 😧

A bit of a long walk back into town but that’s one thing I didn’t mind as the sun was shining and I got a bit of fresh air to help clear my head a little. A visit to the shop and I finally made it home.

You could say I was a bit fed up when I got in and rather tired. A lot had happened today, I had spent the whole day going from one thing to another. And to top it all my arm was beginning to come back to life and was quite sore.